Bahrain Institute of Hospitality and Retail –a division of the Dadabai Holding, hosted its Second Graduation Ceremony under the patronage of H. E. Jameel Bin Mohammed Ali Humaidan,Minister of Labour and Social Development for HTMi Switzerland Diploma in International Hotel and Tourism Management on 11thOctober, 2018 at Wyndham Grand Hotel, Manama, Kingdom of Bahrain.

This milestone has been the result of a partnership between the Former Specific Council for Training in Hospitality under the Ministry of Labor & Social Development, HTMi Hotel & Tourism Management Institute Switzerland and Bahrain Institute of Hospitality and Retail (BIHR).

This event was attended by over 100 guests, dignitaries and BIHR stakeholders as follows:

H.E. Alfonso Ver, Ambassadorof the Republic of the Philippines to the Kingdom of Bahrain;

Mr. Ali Sulaibeekh, Director of BIHR, speaking at the occasion said, “We are very fortunate to have had the endless support of Ministry of Labour & Social Development and Tamkeen in training our students. This is a joyous moment for all our graduates, their families, Ministry of Labour, Tamkeen, our industry partners and the entire BIHR team.” The program helps young Bahraini Nationals in their decision to climb up the ladder in the hospitality sector.

In his speech, Mr. Humbert Vincent Buemi, Swiss Honorary Consul-General to Bahrain congratulated the students and encouraged them to pursue their passion for culinary and hospitality and encouraged the ties between the Swiss Confederation and the Kingdom of Bahrain.

Graduates successfully completed 24 months of rigorous training in the hospitality sector conducted by BIHR. These graduates began their career with passion and dedication to become leaders in the field of hotel and tourism management. The graduates have successful partaken in hosting event on and off campus, have formed a strong base in guest relation, food and beverage, front office and culinary.All the graduates are employed with Bahrain’s Top Hospitality Sector.

During the event, Graduates were awarded as Star students while a few others received special application and recognition awards during the Academic Year 2016-2017.

BIHR since decades had been the only Institute in Bahrain that guarantees a 100% placement for both Bahraini and non- Bahraini students. Hoteliers are keen and earning to have such professional team work in such properties.

BIHR has been training and supporting young Bahrainis in the Hospitality, Tourism and Retail sector for over 19 years. The faculty and staff of BIHR have been committed in meeting the needs of the tourism sector by providing highly trained individuals of managerial competence in the hospitality and retail sector. It also strongly supports Tamkeen’s national reform initiatives and Bahrain Economic Vision 2030.

For more information on courses and admission at BIHR, contact Toll Free No. 8000 1077. 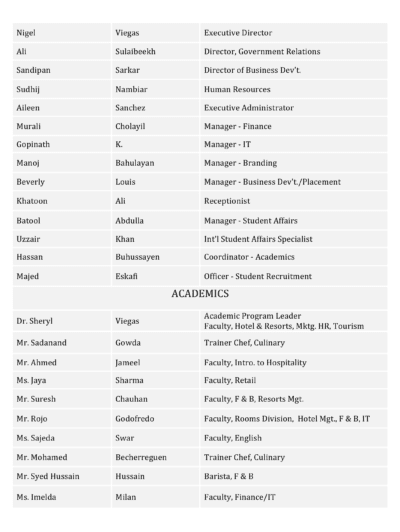